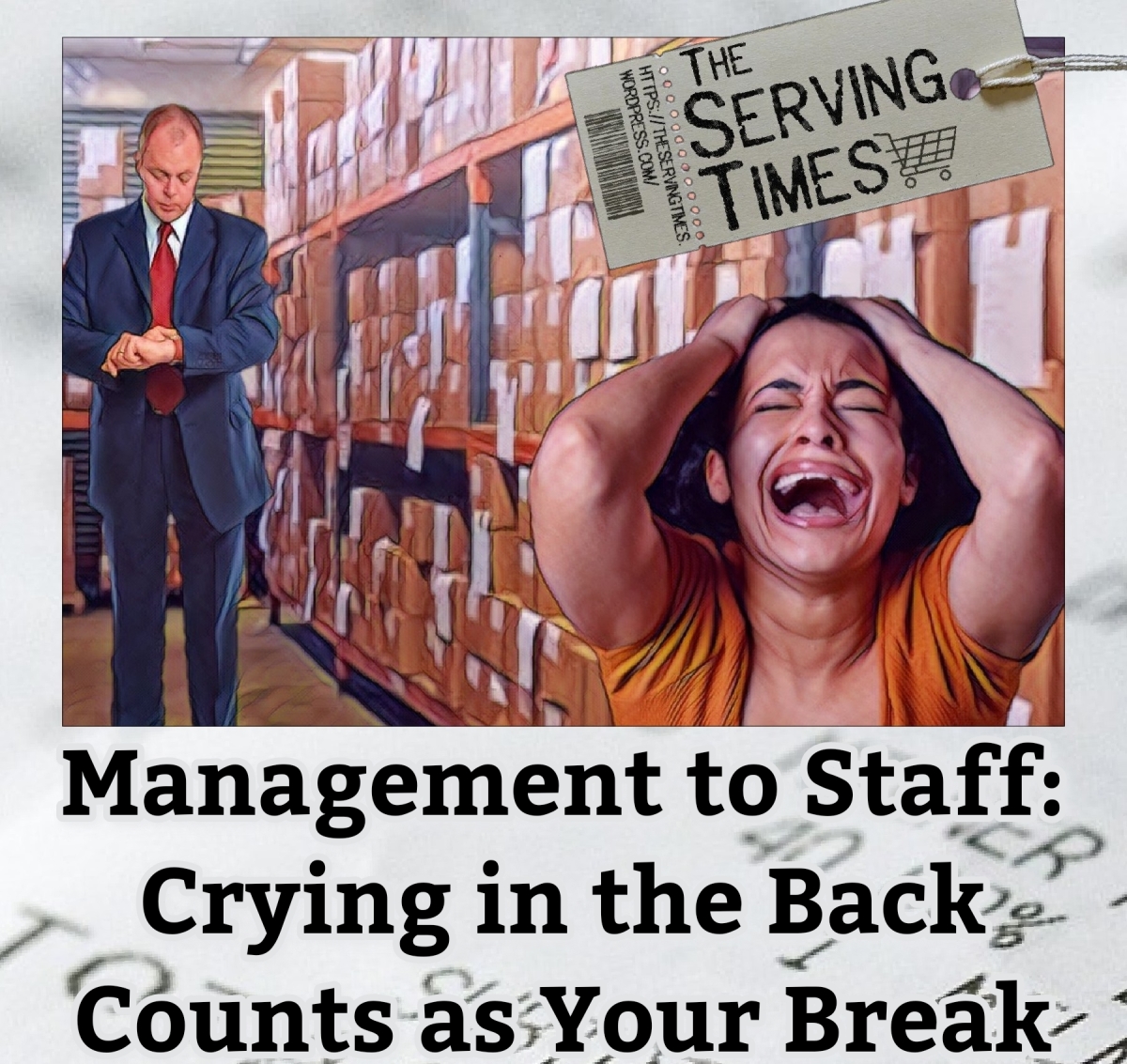 Breaks aren’t just time spent away from your work area, they’re a chance to recharge, reset, and escape the stressors or our jobs. Some will argue, though, that a pause in the workday to answer certain biological functions should count as one’s break, thus robbing the worker of their respite. One retail manager is trying to work that rule into his store’s operating policy and his staff’s reaction has been a far cry from one of acceptance.

Meet Paul Abbott, general manager of a Kohl’s in New Albany, Indiana. He feels his staff has been spending too much time off the floor in addition to their assigned breaks.

“We’re all here to do a job from this time till that time,” says Abbott, “and you’re given a break in between to take a moment before getting back to it. Now, if you step off the floor to take care of your business, fine, just know that counts as your break and you don’t get extra breaks in addition to that.”

Of course, Abbott is referring to that necessary bodily function we all must take care of sometimes: Hiding in the backroom and crying.

“I honestly have no problem with employees crying on the clock,” says Abbott, “but what I do have a problem with is time theft!”

“It’s not time theft,” says sales associate Michelle Doyle. “Our breaks are our time to unwind and get something to eat. I shouldn’t have to make a choice between that and crying. We should be allowed to do both!”

“He acts like we go into the back to cry and then just sit there messing with our phones or something,” adds cashier David Worthington. “Like yeah, I might check my phone while I’m back there, but it’s not like that’s all I’m doing.”

As it turns out, many workers at Abbott’s store take a little time off the floor now and then for a cry session in a back area.

“I used to save my cry for after I clocked out,” says fulfillment associate Erica Preston, “but now that I do it during my shift I’m more relaxed. Feeling that pressure all day, having it on your mind, it stresses you out. I really do think I’m more attentive to my job on the days I step away and take care of it then and there. But if I had to give up my break for it, I think I would just go back to holding it in.”

“Sometimes when I’m having trouble at home,” says stockroom operations associate Rand Ambrose, “I save up my cry for when I get to work. At least I get paid to cry here!”

“Mary tried to comply,” says assistant store manager Ethan Russell. “Eventually she couldn’t hold it in any more and just cried herself right there at the Sephora counter. Others have tried combining their cry session with their lunch break, and you can imagine those are two things you do not want to be doing at the same time.”

“The long and short of it,” says Doyle, “is that most of us consider having a cry at work a part of our job, and counting it as our break is an insult and honestly a violation of our rights.”

But Paul Abbott isn’t having it.

“It’s crazy to me,” says Abbott, “that they expect to get paid to cry on top of their scheduled break. And I’m not saying I expect no crying, nobody’s expecting the employees not to cry, I’m just sick of the double-dipping. It’s like some kind of quiet quitting thing. Except in Joshua’s case. Nothing quiet about that. That guy really bawls, like he lets it all out.”

With memos posted and policies in place all the workers at Abbott’s Kohl’s can do is try to comply or face corrective action. That is, until Abbott realizes he’s engaged in a losing battle, as even he admits “When you gotta cry, you gotta cry.”

“I don’t think he can make this stick,” says Doyle. “A lot of us rely on both our break time and a good cry in the store room to get through our shifts. Unless he wants to fire us all and try to find some magical pool of retail workers somewhere who don’t cry during their shifts he’s just going to have to deal with it.”

“He’s such a hypocrite too,” adds Worthington. “I’ve seen the way the DM talks to him, you can’t tell me he hasn’t ever cried at his desk.”

“I don’t cry that loud, do I?” asks cashier Joshua Lake.

Yeah, dude, I could hear it from the sales floor like the whole time I was here.

“Seriously,” says Doyle, “crying in the back is just about the only mental health benefit we get and we’re not about to give it up.”

Well, the staff doesn’t seem to intend to stop crying any time soon. Paul Abbott should maybe consider cutting his losses and repealing this new, wholly unpopular policy. At the very least, he should consider merely asking that workers stagger their crying so as to not leave the sales area unattended.

When asked what advice she’d give to her general manager going forward, sales associated Michelle Doyle suggests he should “Stop being such a fucking crybaby about it.”